While at Carolina, Raleigh native Tift Merritt joined a band called the Carbines and played Triangle-area clubs in cities of Chapel Hill and Raleigh. In 2000, Merritt won the MerleFest’s Chris Austin Songwriting Contest, and in 2002 she released her debut album, Bramble Rose. The record landed on the top ten lists for both Time and The New Yorker, and was called the Best Debut of the Year by the Associated Press. Her next release, 2004’s Tambourine, was nominated for a best country album Grammy Award in 2004, and she was nominated for Americana Music Association: Album of the Year, Artist of the Year, and Song of the Year in 2005. Since that powerful start, Tift Merritt has performed all over North America and Europe, releasing seven studio albums (two for Lost Highway Records, two for Fantasy Records, and three for Yep Roc Records), with PopMatters calling her album Traveling Alone her “latest gem,” and, in 2017, taping “Tift Merritt & Friends” for UNC-TV at the N.C. Museum of Art.  One of the most popular and acclaimed musicians to come out of North Carolina in recent decades, Tift Merritt received UNC’s Distinguished Alumna Award in 2018. 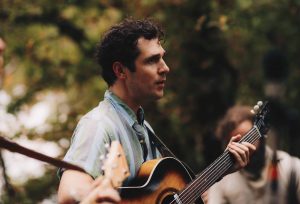 Guitarist Joseph Terrell of High Point was a Religious Studies major at Carolina, who teamed up in 2011 with mandolinist Jacob Sharp and bassist Wood Robinson, both of Greensboro, to form the indie-Americana Chapel Hill band Mipso, later joined by fiddler Libby Rodenbough.  In 2013, Mipso made its acclaimed debut with the album Dark Holler Pop, and Joseph Terrell won MerleFest’s Chris Austin Songwriting Contest. Mipso’s album Old Time Reverie, produced by the esteemed Mandolin Orange singer-songwriter Andrew Marlin, debuted at Number 1 on the Billboard Bluegrass Chart.  Joseph Terrell has continued to serve Mipso as lead singer, guitarist and as a fine and productive songwriter, with a string of releases: 2017’s Coming Down the Mountain, 2018’s Edges Run, and, in the fall of 2020, the band’s sixth album, its Rounder Records debut:  Mipso.  In 2021, Joseph and his brother Patrick will release Eldora, a new album named for their grandmother, who taught them both to play guitar.