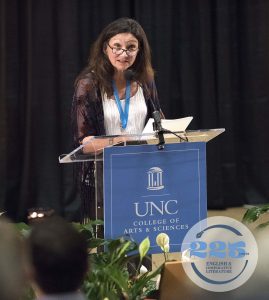 Jill McCorkle’s first two novels were released simultaneously when she was just out of college, and the New York Times called her “a born novelist.” Since then, she has published five novels and four collections of short stories, and her work has appeared in Best American Short Stories several times, as well as The Norton Anthology of Short Fiction. Five of her books have been New York Times Notable books, and her novel, Life After Life, was a New York Times bestseller. She has received the New England Booksellers Award, the John Dos Passos Prize for Excellence in Literature, and the North Carolina Award for Literature. She has written for The New York Times Book Review, The Washington Post, The Boston Globe, Garden and Gun, The Atlantic, and other publications. She was a Briggs-Copeland Lecturer in Fiction at Harvard, where she also chaired the department of creative writing. Of her latest novel — Hieroglyphics, Summer 2020 — the NY Times said “Vibrant, engaging,” and Booklist called it “a powerful evocation of loss and yearning.”  She is currently a faculty member of the Bennington College Writing Seminars and is affiliated with the MFA program at North Carolina State University.