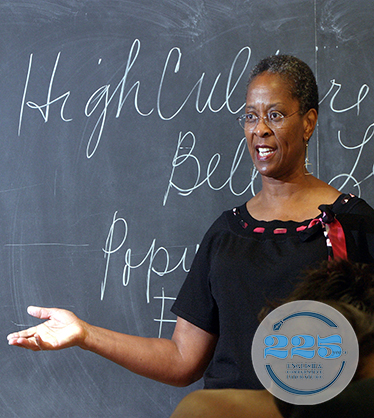 Professor Trudier Harris, now at Alabama and formerly at UNC Chapel Hill, is one of the most distinguished literary historians of our time and was one of Carolina’s most treasured and beloved teachers during her many years here.  She has written ten books, including:  Martin Luther King Jr., Heroism, and African American Literature (Alabama, 2014); The Scary Mason-Dixon Line: African American Writers and the South(LSU, 2009),  (a Choice magazine selection as one of the “Outstanding Academic Titles” of 2009); Summer Snow: Reflections from a Black Daughter of the South (memoir; Beacon, 2003); Saints, Sinners, Saviors: Strong Black Women in African American Literature (Palgrave/St. Martin’s, 2001); and The Power of the Porch: The Storyteller’s Craft in Zora Neale Hurston, Gloria Naylor, and Randall Kenan (Georgia, 1996).  (Lamar Memorial Lectures).  And she has edited or co-edited another fourteen works.  Since Trudier Harris entered the profession in 1973, she has lectured widely, throughout the United States, as well as in Poland, Germany, France, Canada, Jamaica, Spain, Italy, England, Northern Ireland, and South Africa.  We welcome her back to Chapel Hill with great enthusiasm and open arms.